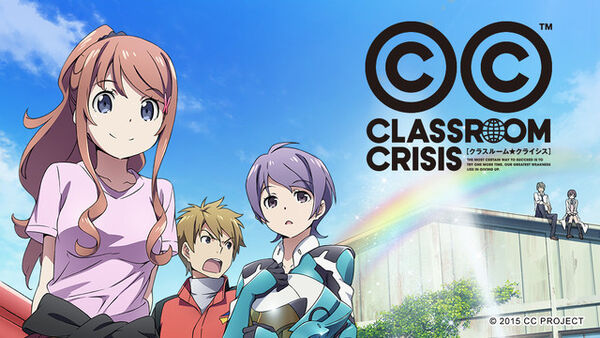 Welcome to the wiki. We’re a collaborative community website about Classroom Crisis topic that anyone, including you, can edit. Click the edit button at the top of any page to get started!

We currently have 685 edits to 46 articles and 54 images on this wiki.
About

Classroom Crisis (クラスルーム☆クライシス Kurasurūmu Kuraishisu) is a Japanese anime television series animated by Lay-duce and produced by Aniplex. The series is directed by Kenji Nagasaki and features original character designs by Hiro Kanzaki. It premiered on July 3, 2015.

With aims to one day reach out into the stars, humanity has colonized all the planets of the solar system. A well-known space aeronautics mega-corporation named Kirishina Corp. has opened an academy on Mars, and a specialized class in that academy, named A-TEC (Advanced Technological Development Department, Educational Development Class) contains especially talented students, spending part of their time in class, and the other part of their time working to develop rocket engines.

The story follows the members of the A-TEC class, and their progress on developing a new engine, called the X-2, while dealing with issues related to both being in high school, and being company employees engineering rockets. The issues they will face include those stemmed from adolescence and those brought onto them from higher management.

Retrieved from "https://classroomcrisis.fandom.com/wiki/Classroom_Crisis_Wiki?oldid=4436"
Community content is available under CC-BY-SA unless otherwise noted.